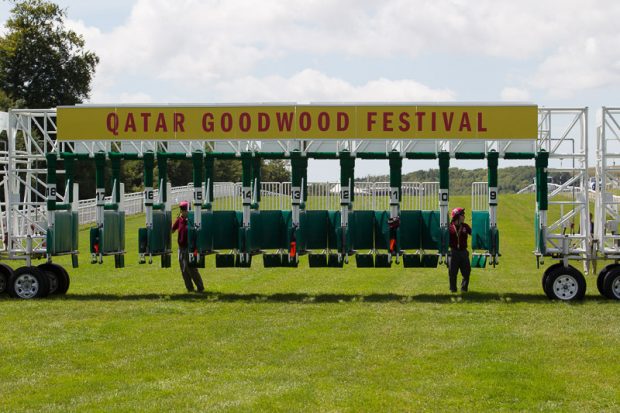 The final day of glorious Goodwood begins with the
consolation Stewards’ Cup and Rewaayat – surprisingly for a son of Pivotal – is
unbeaten on good to firm ground although he has been raised 12lbs for that
facile success. He looks sure to go close but he does have a tendency to carry
his head high and preference is for Call Me Ginger (1.50) who might have bumped
into one when runner up in the Scottish Stewards’ Cup at Musselburgh last time.
The selection was slowly away on that occasion and cannot afford such a luxury
in this field, but, if he gets out on terms, I would be disappointed if he did
not run a big race for Scottish handler Jim Goldie.

Manuela De Vega has made most to win her two starts so far
this term over 12f, but both victories have come with plenty of cut in the
ground and I must give Enbihaar (3.00) another chance in the 14f Group 2 Lillie
Langtry Stakes to show her Newmarket reappearance was not her true running. She
actually beat Ralph Beckett’s filly by 5L on fast ground in the corresponding
race 12 months ago and is 17lbs better off this afternoon!

Snow finished fifth in the Irish Oaks earlier in the season
and she looks the sort who will appreciate stepping up in trip but she faces a
tough task if the John Gosden trained mare is back to her very best.

The William Haggas-trained Naharr has been all the rage in
the antepost market for the Stewards’ Cup and he must run a big race but I am a
big fan of Mark Johnston’s Meraas (3.35) who I have considered potentially a
Group horses since running away with a Kempton Maiden back in June when he
brushed aside Cold Front representing the Haggas stable. Meraas is drawn in
stall 4 which is a slight concern but three of the last five winners of this
sprint handicap have been won by the classic generation and a 6lbs rise for the
selection’s Musselburgh success looks fair.

I am convinced Cold Front is a Group horse on ground with
give underfoot but he is difficult to recommend given the forecast although I
suggest we keep him on the right side this autumn off his current mark.

Golden Horn’s progeny appear to relish fast ground and
Golden Flame (4.40) can confirm the promise of his debut when he went down by half
a length to Devious Company who finished second in the Gp 2 Vintage Stakes here
earlier in the week. Trainer Mark Johnston often targets this race with one of
his best juveniles, the colt is well drawn in stall three and Ryan Moore is
booked.

At Newmarket I hope to see Katara (3.15) win the listed
Chalice Stakes for Sir Michael Stoute. The filly was impressive at Kempton over
1m 3f last time having finished second at Yarmouth on her reappearance. This
does not look the strongest of listed contest and Oisin Murphy takes over in
the saddle.

I thought Intrepid Italian (7.30) ran a better race than his
finishing position suggests when third at Lingfield last time and I hope to see
him maintain his progression back on turf at Chepstow this evening. The
selection did not appear to get home over 7f here on debut, but he has
flourished on the all-weather this term winning two of his three starts on
polytrack post lockdown.

On Sunday Molinari (3.20) is taken to go one better than
when runner up at Ascot a week ago in what was a much better race than todays.
The problem, however, is his poor draw in stall 12 – of 13 – although looking
through the field it appears that only Haraz might take him on for the lead.
James Doyle takes over in the saddle with David Egan riding at Newcastle.

There is a good card at Newcastle, and I am pleased to see
Prejudice (3.25) drop back to 10f for David Simcock having, seemingly, been
outstayed at York last time over an additional quarter of a mile. That was
still a good effort and he gets into this race at the foot of the weights. Simcock
fits cheekpieces for the first time and the son of Dubawi is well housed in
stall two.

The post Weekend Preview appeared first on Racing Ahead.